Hewitts Solicitors is one of the largest legal firms in the north of England with offices in Bishop Auckland, Darlington and Stockton. Thanks to more than 60 years experience of serving the local community, Hewitts 80-strong team of partners, consultants and associates work together in dedicated legal teams. Its experts cover the full spectrum of legal services including agriculture, commercial property, criminal law, personal injury, family law, business law, road transport, wills and probate.

The EU Referendum on June 23 has serious ramification for businesses. Although the precise legal ramifications of a Brexit will not become clear for several years it will undoubtedly lead to a period of considerable uncertainty. During this time commercial clients would face a fast changing legal landscape with regards to their rights and responsibilities.

With a myriad of questions around employment, working hours, workforce rights, taxation, financial services and the legal status of foreign workers many businesses had a pressing need for answers.

The ambition was to assemble a panel of experts, with a specific business specialism, who could make the case for both sides of the argument and answer questions from the audience.

Both sides of the Brexit debate were under intense media scrutiny even before the campaign officially began on April 15. Despite this, one common criticism in the run up to the vote was the confusion sowed by both sides of the argument as regards the benefits/drawbacks of Britain leaving the EU. We therefore perceived a need for trustworthy debate aimed at the region's business community.

From the outset it was hugely important that the expert panellists were credible to a business audience, highly knowledgeable and excellent public speakers.

We decided on a mix of business leaders, politicians and academics. Using our extensive contacts, we managed to secure the attendance of Chi Onwurah, Shadow Minister for Business, Skills and Innovation and Jessie Joe Jacobs, campaign director of Britain Stronger in Europe.

Speakers with a business background who agreed to join the panel with Ian Stark, CEO of Chemoxy International, and Andrew Saunders, a financial director and leader of Business for Britain.

From the world of academia, we signed up Kevin Dowd, a professor of economics from the Durham Business School, and David Campbell, a former head of Durham University's Law School.

However, just having a great panel wasn't going to be enough.

Attracting a large audience in such a febrile atmosphere - with near 24-hour rolling news coverage of the referendum campaign - posed the biggest challenge: how to make the Hewitts EU Referendum debate stand out from the dozens of other competing events?

Real Results Marketing negotiated a co-sponsorship deal with The Northern Echo, the North-East's largest regional newspaper, guaranteeing coverage in-paper and online. The media sponsorship package included a number of page leads, features and plugs for the event as part of the paper's wider EU Referendum coverage.

Concomitant with the traditional media exposure, Real Results instigated a social media campaign to build the event's profile via Twitter, Facebook, LinkedIn and Eventbrite. On the day, Real Results staff tweeted the debate live as did The Northern Echo and Chi Unwarah under the #echoinout hash tag.

The debate was held in Darlington's new £38m Centre for Process Innovation on Wednesday, June 15, from 9am- 10.30am in front of a sell-out crowd. It was also featured as a page lead in the following day's Northern Echo and online.
Prior to the event, Hewitts received advertising alongside The Northern Echo's EU Referendum coverage including, on the day, a double page spread in the paper's business supplement and a feature on the op-ed news page.
Social media posts during the event reached more than 50,000 people. 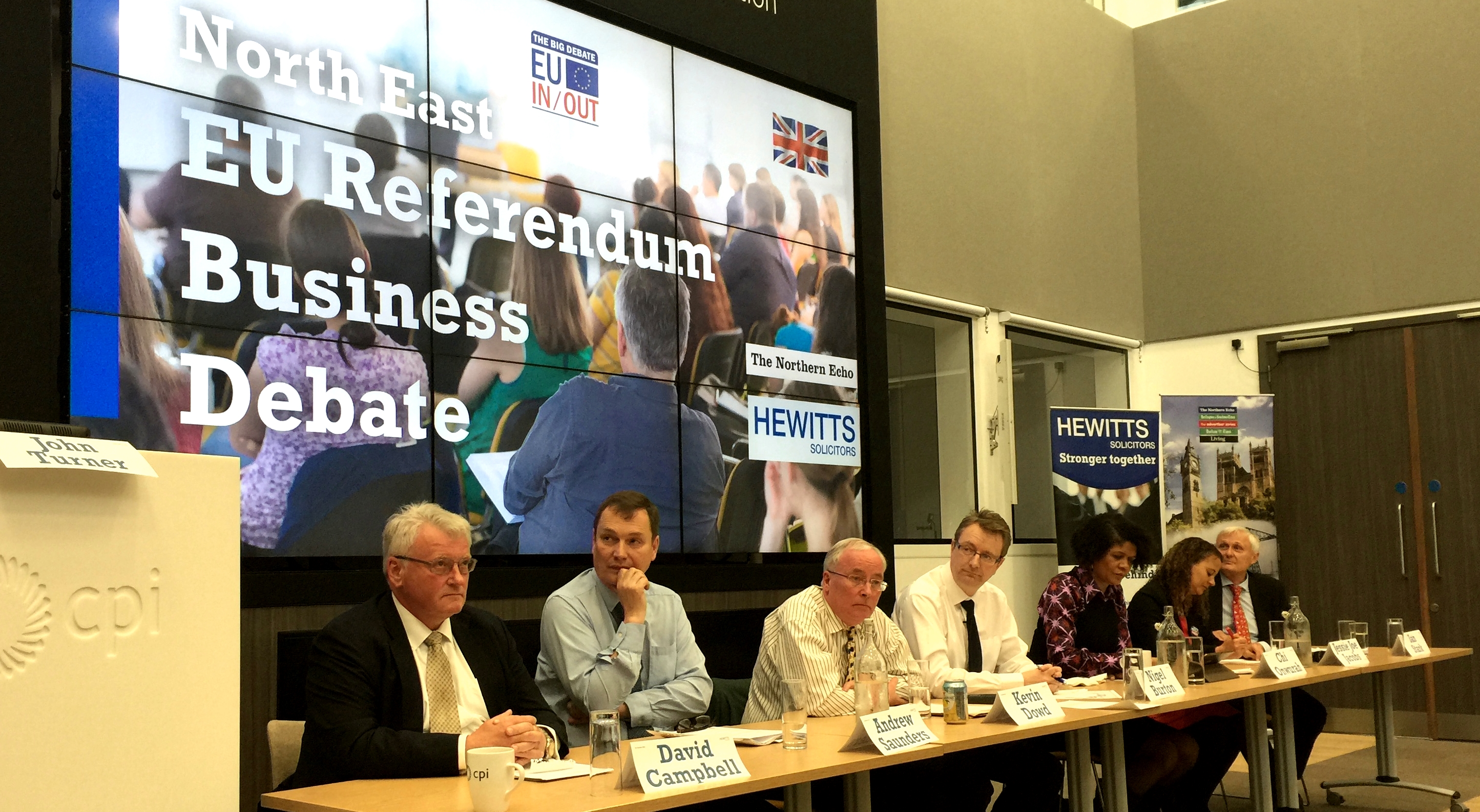